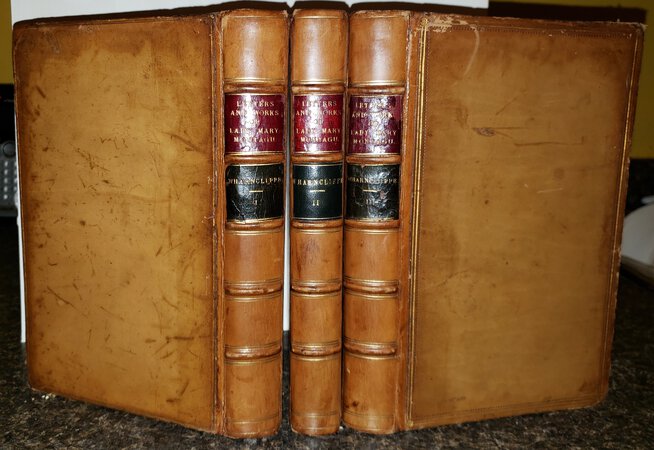 London: Bentley, 1837. Three volumes. Old polished calf, nicely rebacked to style in modern calf, with the original morocco spine labels laid down, marbled endpapers and page edges; 424, 425, 467 pp.; with the half-title pages, errata slip, a frontispiece in each volume, and two additional portraits. Bindings with modest rubbing; VG externally, internally fine, firmly and attractively bound, a nice set. Lady Mary Wortley Montagu was one of the most remarkable women of her time: poet, essayist, wit, peripatetic traveler, prolific letter writer, proto-feminist. With her husband, the ambassador to the Ottoman Empire, she lived and traveled in Turkey, where she observed the practice of smallpox inoculation and was the first to introduce it to Western medicine ("I am going to tell you a thing that will make you wish yourself here. The small-pox, so fatal, and so general amongst us, is here entirely harmless, by the invention of ingrafting, which is the term they give it"). Without her husband, as she often was, Lady Mary traveled and resided in many other places, including the south of France, Italy, and Switzerland. Her letters, particularly those written from the East, are what she is principally remembered for. Her embassy letters have been described as "the very first example of a secular work by a woman about the Muslim Orient" (Melman, Women's Orients: English Women and the Middle East, 1718-1918). 3 kg parcel