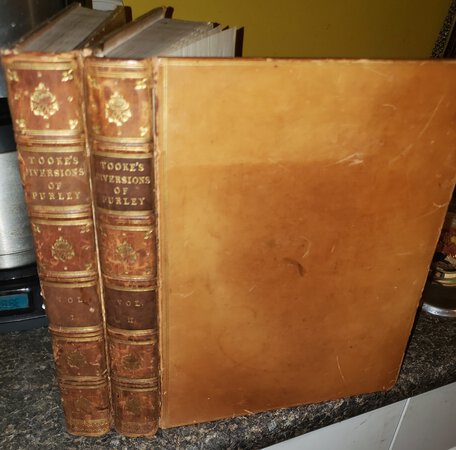 Epea pteroenta.. Or, the diversions of Purley

London: Printed for the author, at J. Johnson's, 1798 , 1805. Two volumes. Part I, 1798, Part II, 1805. Second edition of Part I, first edition of Part II. pp (6), 534 + frontispiece by W. Sharp + plate at p 454; (8), (532), index. Contemporary tan calf, spines with raised bands, two label, gilt ornament to the compartments. Some uneven sunning and minor scuffing to covers; bit of wear to joints; each volume neatly repaired to the inner hinges with archival cloth tape. Vol. I has the shadow of a label removal inside front cover and slight foxing to the frontispiece and title page. In all, VG externally, internally clean, fresh, fine, now sound in the bindings. ESTC T32791 >>> Tooke was an English clergyman, radical politician, and philologist, was " one of the most effective English agitators for parliamentary reform and freedom of dissent in the late 18th century. He attacked the powerful Whig magnates but stopped short of advocating democracy."- EB. He agitated for parliamentary reform and self-government for the American colonies (which landed him a prison term). An enthusiastic philologist, he was among the first to regard language as a product of historical development rather than as a fixed structure." - EB. The Diversions of Purley "is a treatise on etymology: the author contending that in all languages there are but two sorts of words necessary for the communication of thought, viz., nouns and verbs; that all the other so-called parts of speech are but abbreviations of these, and are 'the wheels of the vehicle language.' He asserts also that there are no indefinable words, but that every word, in all languages, has a meaning of its own. To prove this, he traces many conjunctions, prepositions, adverbs, etc., back to their source as comparisons or contractions; accounting for their present form by the assertion that 'abbreviation and corruption are always busiest with the words most frequently in use; letters, like soldiers, being very apt to desert and drop off in a long march'. Throughout the work, the author constantly refers to his imprisonment and trial, introducing sentences for dissection which express his political opinions, and words to be treated etymologically which describe the moral or physical defects of his enemies." - Bartleby. A third volume was contemplated but never finiished. Today his philology is regarded as eccentric and misguided. 4 kg parcel, extra shipping will be required.; Quarto