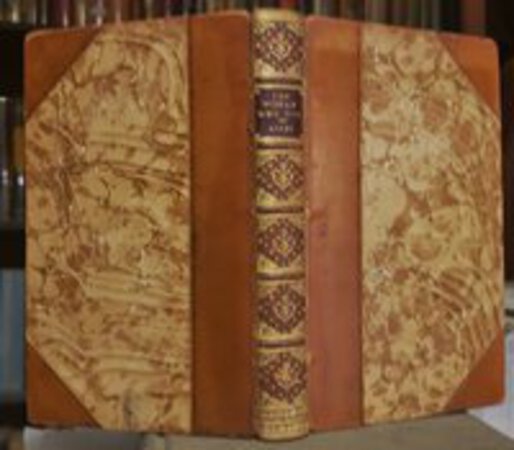 THE WOMAN WHO DID

London: John Lane. 13th printing (first was Feb., 1895). Title page vignette by Aubrey Beardsley. pp 241, binder's blank front and rear, with the half-title, but bound without the ads at rear and tissue guard at front. Bound in contemporary half calf and marbled boards, spine with raised bands, titling piece, and elaborate gilt decoration to the panels, marbled endpapers. Front joint neatly and discreetly repaired; text paper slightly toned, page edges tanned; else near fine, sound in the binding. Monogram bookplate of Sir Michael Bass, Rangemore (1st Baron Burton, a brewer). Number 8 in the renowned Keynote series. Allen's best-known book, a novel about a woman who willfully had a child out of wedlock, it caused something of a scandal but was also a bestseller. Today considered an important book in the battle for women's rights, a noted "New Woiman" novel, even though the writing is a bit silly and the book is in reality more social history than literature. '"against [prostitution] I have endeavoured to wage war to the utmost. The moral of my book is, we must put down this hateful slavery of women. And marriage, I contend, necessarily entails it. Therefore, I imagine a pure woman, who, seeing the issues involved, logically and ethically pronounces against marriage. I thought I had put this contention in the plainest possible language; but so far, strange to say, not one of my critics seems to have grasped it.' - Grant Allen, in a letter to the editor of The Westminster Gazette, 23 Feb. 1895. An attractive copy, most unusual to see the book in a fine binding. ; 12mo