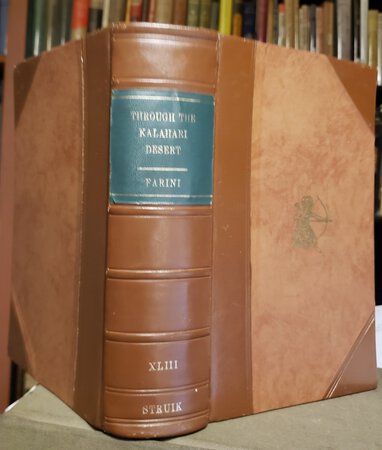 THROUGH THE KALAHARI DESERT: a narrative of a journey with gun, camera, and note-book to Lake N'Gami and back

Edition: First of this edition

Cape Town (South Africa): C. Struik, 1973. Facsimile reprint of the London, 1886, original, the deluxe issue, number 50 of 50 mechanically numbered copies bound in half leather and brown boards, gilt device on front cover, spine with large green label, raised bands, gilt lettered. pp (6), two leaves of portraits, (iii)-(476) + plates on text paper + 2 folding maps at p. 428 and at rear. Illustrations in text, index. Very small chips to corners of spine label, else fine, no owner names. Volume 43 in the publisher's Africana Collectanea Series.>>> William Leonard Hunt was born in Lockport, New York. His parents moved to Hope Township (Port Hope) in 1843, and then to Bowmanville, ON, where he grew up. Fascinated by the circus from an early age, he determined to become an acrobat and trained himself to proficiency. Changing his name to Guillermo Antonio Farini and adopting the stage name "The Great Farini", "he made his most famous tightrope performances at Niagara Falls during 1860, commencing on August 15. His feats included crossing a high wire with a man on his back or with a sack over his entire body, turning somersaults while on the rope, hanging from it by his feet, and other seemingly impossible manoeuvres." (Wikipedia). Farini toured the USA and Europe as an acrobat, becoming famous, retiring in 1869, but not before inventing the standard circus stunt "the human cannonball". "Farini purportedly overcame many obstacles when he traversed the Kalahari Desert on foot during his stay in Africa, allegedly becoming the first white man to survive the crossing. He also claimed to have found the famous Lost City of the Kalahari, but his claims have never been verified." - Wiklipedia. The Lost City is almost certainly a fable. The original edition of this book is very scarce and costly. 1.5 kg parcel