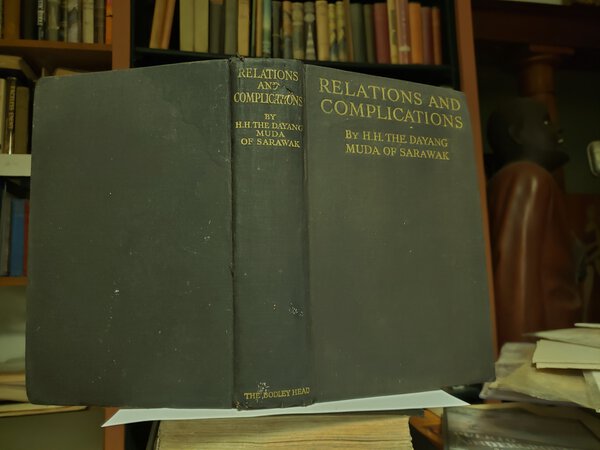 RELATIONS & COMPLICATIONS: being the recollections of H.H. the Dayang Muda of Sarawak. With a Foreword by the Rt. Hon. T.P. O'Connor. And 38 illustrations from photographs

London: John Lane The Bodley Head, 1929. Black cloth lettered in yellow. Presumed first binding (also noted in grey cloth lettered in black). pp (xx), 253, [1], (6, ads) + 32 plates containing 38 photos. Corrigendum slip at page 69. Page edges darkened; small cloth snag to spine title repaired; nicks and very shallow loss across head of spine; endpapers yellowed, with ink owner inscription at front; long old cellotape repair to pp 51-52 (no text loss); else a VG clean, tight and unworn copy. >>> Ms Palmer, a member of the Huntley & Palmer biscuit company family, enjoyed the company of Wilde. Ruskin, Daudet, and her godfather George Meredith at family table. In 1904 she wed Bertram Brooke, the grandson of the first white Rajah of Sarawak (Borneo) and they went to live there. When occasion came to write her memoirs, she found herself unable to do so and hired the (later) noted American novelist, short story writer, and political activist Kay Boyle to ghostwrite the book. The then 18 year old Canadian John Glassco was hired to type the manuscript, which he did well, but he also "inserted in the mouths of the long-dead great additional flights of repartee and far more brilliant bon mots than I had managed to create alone." (Kay Boyle, in Being Geniuses Together). Robert McAlmon wrote that all the dainty wit and bright wit" in the book were Glassco's, and also said that "while [Glassco's] contributions to the book were trivial, the memoirs were so trivial that [Glassco's] contribution took on profundity". Glassco's contribution was not so trivial after all as Boyle told her bibliographer that he, along with Palmer's cousin Archibald Craig. wrote the last two chapters. This is credited as Kay Boyle's first published book, though she also published a collection of short stories with the Black Sun Press in Paris in 1929. It may also be considered Glassco's first extant publication in a book (he reported a 1928 verse pamphlet and a 1929 collection of soft core porn, but there are no known copies of either and it is not certain either were actually published). Fraser Sutherland in his Glassco bibliography does not mention the present book, though he does note that Glassco and Boyle had a brief affair. >>> The book contains much on the Paris expatriate scene of the 1920s and includes a photo of Gertrude Stein. Also mentions Joyce, McAlmon, Boyle, Mary Butts, Winston and Randolph Churchill, Cocteau, Daudet, Isadora and Raymond Duncan, Proust, Ruskin, Ernest Walsh, Ellen Terry, Wilde, and a host of other notables. The book is fairly scarce in the market.