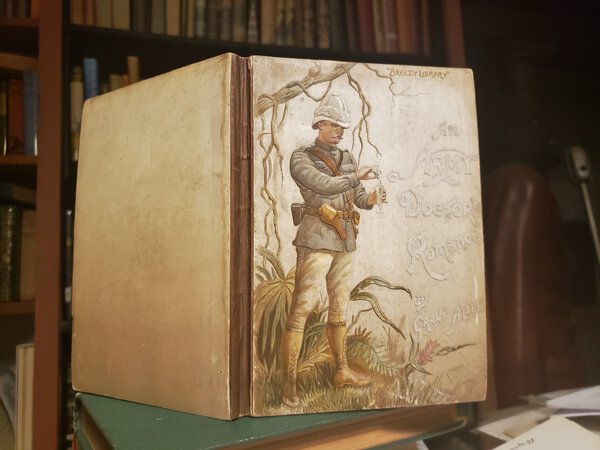 London: Raphael Tuck, no date [1893]. Card covers. Felxible white front cover embossed with chromolithographic illustration, brown cloth spine, glossy plain cream stiff card rear cover, pp (6, including frontis. photo portrait of author), 109, (3, ads) + colour oleograph illustration facing page 1 + 3 b&w plates. Breezy Library no. 3. " It is a simple love-story in which Muriel Grosvenor finds herself in the position, thanks to her domineering mother, of having agreed to marry two men at once. Both are in the Army and before the matter can be resolved they are sent off to Africa on a campaign to quell a rising of the Matabele. Here the doctor Oliver Cameron saves his wounded rival's life; fortunately, the latter falls in love with his nurse. It is curious that GA, a formidable anti-imperialist, should so often describe such bloody inter-racial colonial conflicts as though they were mere boyish pranks."- Peter Morton. ; 12mo