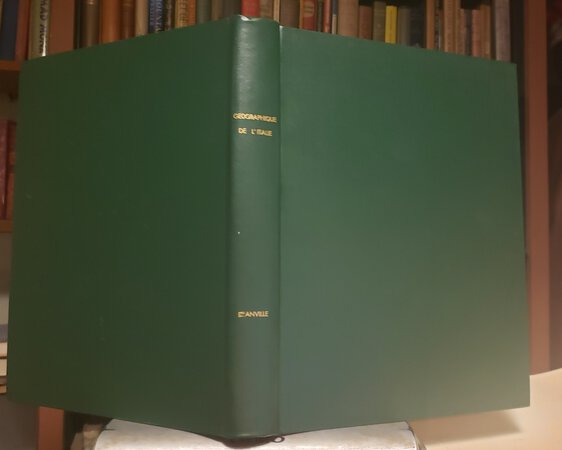 Paris: la Veuve Estienne & Fils, 1744. Quarto (26 cm) in modern forest green cloth, mustard endpapers; xl, 288, [2] pp., all page edges gilt; engraved vignette, head- and tail-pieces, some with later hand-coloring heightened with gum arabic; two engraved folding maps (complete). Jean-Baptiste Bourguignon d’Anville, Royal Geographer to the kings of France, was one of the leading geographers and cartographers of his time. He was known for his meticulous research and the reliability of his maps, many of which were considered great improvements over their predecessors and remained trusted cartographical resources throughout the eighteenth and n ineteenth centuries. “D’Anville’s...map of Italy... first indicated numerous errors in the mapping of that country, and was accompanied by a valuable memoir (a novelty in such work), showing in full the sources of the design. A trigonometrical survey which Benedict XIV soon after had made in the papal states strikingly confirmed the French geographer’s results” (Encyclopaedia Britannica, 1911). The work includes d’Anville’s map, “Parallele du contour de l’Italie,” correcting the errors of his predecessors, Guillaume de l’Isle and Nicolas Sanson. Occasional browning to the text, scattered spotting and stains, text block cracked in a few places land at the last leaf, one map with some browning and wear to the edges and with a tear repaired on the verso with tape; else clean and sound, securely bound. Binding is in fine condition. “One of the scarcest of d’Anville’s works,” according to notes penciled on the front endpaper by a previous owner / bookseller. 1.25 kg parcel.