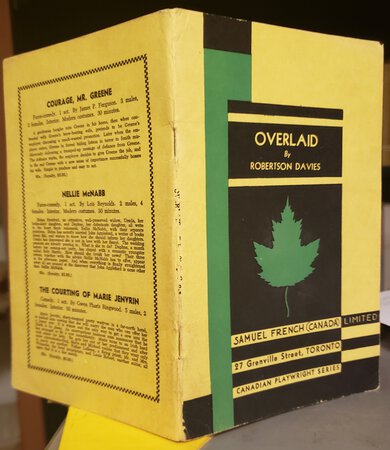 Toronto: Samuel French (Canada), 1952. Stapled, in yellow card covers printed in black & green, with green maple leaf on front cover. Slight rubbing to spine with most of spine lettering rubbed away, small soft corner crease to front cover, and to rear cover, VG+ otherwise. First published in 1948, this was RD's first published play, and his fourth book overall. It was a volume in the publisher's Canadian Playwright Series and was first produced by the Ottawa Drama League in 1947. It is also Davies' rarest trade book in first printing with this second printing being quite scarce itself. A one-act pla; 12mo ; 24 pages