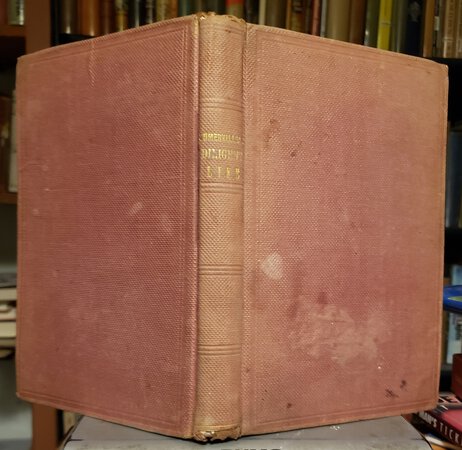 Montreal: John Lovell, 1860. Brown cloth, spine titled in gilt and ruled in blind. pp [2], viii, (9)-320. Bit of wear to foot of spine neatly repaired; damp spots to front cover; ink owner inscription and soil spots at front and rear; else a VG tight and unworn copy. The original owner, Thomas Lamb of Hamilton, Ontario, had been a member of the Scots Greys. Somerville was a British radical journalist who had served with the Royal Scots Greys. He ran afoul of his commanding officers in 1832 at the time of the Reform Bill. He was court martialled and endured 100 lashes before purchasing his discharge. "Richard Cobden persuaded Somerville to join the Anti-Corn Law League in August 1842. He promoted free trade in rural areas where protectionism was in the ascendant. He recorded what he found and Friedrich Engels quoted him in his The Condition of the Working Class in England (1845). These were later published in three volumes under the title Whistler at the Plough (1852–53). However he later fell out with Cobden due to his pacifism which he considered as weakening Britain. Somerville moved to Canada with his family in 1858. He was suffering serious financial problems and was also thoroughly disenchanted with Cobden and his pacifist views. His wife died shortly after their arrival in Canada. Although they were living in poverty, Somerville contributed to Canadian journalism in a number of ways. His Narrative of the Fenian Invasion of Canada was an important piece of writing. He wrote for two versions of the newspaper Canadian Illustrated News. Supposedly about 5000 pages of memoirs which have never been found were written in his last years. He ended his years residing in a woodshed and writing while living in abject poverty." - Wikipedia. ; Octavo