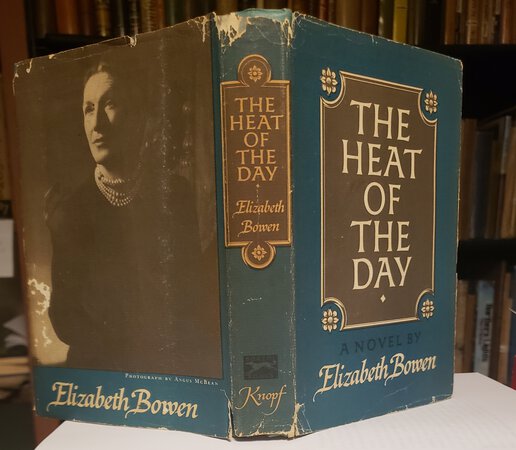 THE HEAT OF THE DAY

New York: Knopf, 1949. Special edition of 500 copies signed by the author, issued for Christmas, 1948. Green cloth. Page edges yellowed, vertical ridge to spine, VG otherwise. Dust jacket has chips, tears, and rubbing to ends of slightly darkened spine; rear panel has a small abrasion and is rubbed along the flap folds; small chips to outer corners; edge nicks; good, flap price intact. A novel set in London during the Blitz, it has been selected by the Guardian as #69 of the100 best novels in the English language. There was a television adaptation by Harold Pinter. “No novel has better caught the atmosphere of London during the second world war.” - Anthony Burgess. UK edition was issued Feb., 1949,; Octavo; Signed by Author